The Playgroup is the playgroup where Peppa Pig and her friends attend.

In Peppa's adventures, the playgroup closes near the end of the show, and is moved to the users mansion where Sonicthehedgehog223's kids, Gronic, Blonic, and Jonic teach the children, which is also the case in Peppa's Adventures: Next Generation.

In SamuelSonic’s original episodes, the playgroup got destroyed due to a car crash by Daddy Pig and it had to be rebuilt

In Cursed Peppa, the playgroup is pretty much the same, but is referred to as "Pwaygwouph".

In Peppa Pig: rise of the apocalypse, the playgroup was destroyed due the unknown monster attack it. It was later revealed that Mechagodzilla destroyed it.

In Some Wandom Noob's Fanon, it ends in July and picks back up in October. 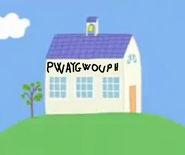 The Pwaygwouph from Cursed Peppa
Community content is available under CC-BY-SA unless otherwise noted.
Advertisement