She rode a firework hoping to get to space (OrangeBlueWaterMelon's Fanon)

Peppa Pig is a pig and the main titular protagonist of the series. She often fancies jumping in muddy puddles (a possible tradition of the pigs). She lives with her younger brother George Pig and their parents under the same house. She has many friends, but Suzy Sheep is her best friend (although Peppa becomes best friends with Belinda Bear after Suzy ditches Peppa for Pedro Pony in Poppies and Puddles). It is depicted that she is the leader and tactical planner of a group consisting of Suzy, Danny and Pedro. She is currently 6 years old (known in the episode "My Birthday Party") and is in the playgroup with her younger brother. Her favorite game is jumping in muddy puddles and spends all day doing it. Her favorite toy is a stuffed bear named Teddy, which rarely seems to be a boy but is a girl. The character's design was created by the creators of the series, Neville Astley and Mark Baker. In the Peppa's Pompous Plot universe, Peppa has the stand Muddy Puddles .

According to the episode "The Olden Days", Peppa Pig was born on the 30th of May and was much like Alexander Pig, she suggests. When she was born, Daddy Pig and Mummy Pig had a house to protect it. Mummy Pig hanged pictures, Daddy Pig put a shelf (not yet fixed; appears in the episode "The Toy Cupboard") and Grandpa Pig watered some flowers that Daddy Pig had barbered carelessly, as he wanted Peppa and her best friend to play nicely. At 11 months Peppa made a moral friend we know today as Suzy Sheep. They did the following things together: crying, burping, and laughing, as counted by Mummy Pig in the episode. One day, Peppa found something that would be good for her (a muddy puddle) and started jumping without even knowing that she discovered it. Her parents said that it was a muddy puddle and they put some boots so she could jump without getting dirty; despite this, in the first episode of the first season, "Muddy Puddles", she jumps without boots and Mummy teaches her again. Sometimes it is disgusting to some people and she is at each other’s throats with her friends.

Peppa Pig is an adorable and very beautiful female pig who is the protagonist. She enjoys jumping in muddy puddles, playing with her teddy bear, named "Teddy," playing pixie games and dressing up.

Peppa is light pink with pink cheeks and hot pink lips. She has small ears and a pig snout, as well a curly tail. She is often shown wearing a red dress with a pair of black shoes.

Interestingly, in the episode "New Shoes", she lost her shoes, and she bought some red shoes; however, in the episode "The School Fête", she again has black shoes. In Trip to China she has a red and pink Hanfu. In Poppies and Puddles she has a simple red dress with flowers and polka dotted designs and has a crimson hat with a pink ribbon tied in a bow at the front. In "Dance Class" Peppa first wears her Season 15 raincoat, which is red and white. Peppa's practice dress is dark red with short puffy, frilled sleeves and a sand red petticoat revealed by the opening at the front of her skirt, and black strapped ballet shoes. In "Sports Day" she wore a ripped red fishnet dress with a black underskirt and dark purple skull necklace while Emily's clique killed people. After that she wore a black dress with blood on it, dark purple fishnets, red chandelier necklace and dark purple apron with a grey underskirt. Peppa's swimwear is a red swimsuit with red frills near the bottom. While Peppa was at the airport, she wore a pretty pale red jacket over her dress. During "Peppa Comes In Like A Wrecking Ball" she wore her signature red dress at the start, but while on the wrecking ball, Peppa was naked.

The black and white pencil drawings of the porker and her family may look familiar, for these are previously unseen original sketches for the Peppa Pig cartoon series, which is now shown and broadcast in 180 countries and territories. Producer Phil Davies, of animators Astley Baker Davies, which came up with Peppa, said: “In the first drawing there’s no pink on Peppa and she has a flowery dress. Peppa Pig sounded good so the name stuck. But then we needed her to look different to her brother George so she was changed." As colleague Mark Baker played with his sketches back in 2000, she got pinker and her dress became red, and so, the Peppa that millions of children would come to love was born. Today, her pink face is on nightwear, duvets and a range of toys and books. Now it is also clarified that, if you collect more money, you may say something like "Peppa Pig comes with a new season and added 'We don’t live a celebrity lifestyle. God forbids anything like that happened. It’s all about having fun and muddy puddles.'"

Despite her cuteness and beauty, she's really cheeky, loves showing off for attention, and gets angered easily (hence her name and red-colored dress) but she means well, loves joking about, and is a fun-loving extrovert overall. Peppa sometimes is good with her friends, her little brother and sometimes their parents, who are always there to correct their discomfort, they are also responsible for instilling values ​​like friendship. She is very loving with their grandparents, they will bring lots of fun things. She also has a good side and a side of panic and fear. In the episode Peppa's Christmas, she is frightened by the noises Santa Claus made down the chimney of her house. Despite this, she is very brave and heroic. In the episode George Catches a Cold she is shown not to be very tolerant, because she always wanted to be alone. In the episode My Cousin Chloe, she gets angry and begins to boast of being the largest. Peppa is also tomboyish, as seen in many episodes. In the upcoming Peppa Pig adult series, Peppa will be the most intelligent out of the Pig family, having an I.Q. of 158.

Peppa is also shown to be the luckiest in the Pig family and the luckiest in the West Midlands, as she always inflicts karma on those who try to mess with her, and just about everything goes her way. Whenever she is about to receive karma by someone, it bounces back off her and hits him/her instead. (For example, in the episode Mr Potato's Potato Wonderland, she eats a pack of Mr Potato's Potato Chips and throws the packet on the ground, and as a result, a guard gets hit by a bus and dies.)  However, her luck runs out. In the episode The Pied Peppa, she finally gets her comeuppance by getting humiliated by Suzy in front of everyone in the West Midlands.

....... Peppa Pig is the main character in April Ravine: The Video Game's story mode, and she can be played from the start. Her favorite season is spring, according to her "Personality & Favorites" tab.

In the character files of April Ravine: The Video Game, she is an adult.

Peppa Pig: The Fractured But Whole

Peppa appears as the main character alongside The New Pig, leading Peppa's gang against Emily's clique. 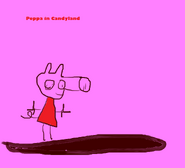 Add a photo to this gallery 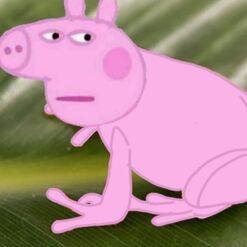 Peppamorph
Add a photo to this gallery