Candy Cat is a British spin-off series of Peppa Pig. Instead of focusing on Peppa herself, it focuses on a more anthropomorphic-looking Candy Cat. It airs on CBeebies in the UK, Ireland, Mexico, Poland and Australia and CBC Kids in Canada. The first series (52x10) aired June 18, 2015 to May 5, 2016. A second series has premiered in summer 2017. A third season has been in development. 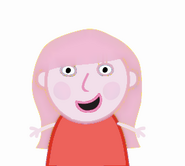 Peppa as she appears on the show

Penny Poodle, and the Lion Twins as they appear on the show

Candy Cat and Suzy Sheep are angry to Peppa Pig 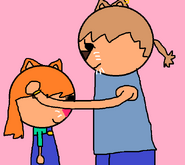 What Candy looks like in her pajamas/when she's angry
Community content is available under CC-BY-SA unless otherwise noted.
Advertisement