Died By Giving Birth To Her Son (Mochililies Fanon)

Candace "Candy" Cat is a sweet but secondary character of the Peppa Pig series who isn't allowed near sharp objects. She is (allegedly) a cat and is one of Peppa's friends. Candy's first appearance is in the episode "The Playgroup", although in this episode she doesn't say anything, but she giggles.

In the 1980 series, she first appeared in the episode "Candy Cat".

She is the daughter of Rebecca Rabbit and Daddy Pig however Mummy Pig does not know, as confirmed in "The Candy Stalker". She is secretly a 40 year old man who is stuck in the body of a 7 Year old girl.

She is a secret murderer and that is why Gerald Giraffe never came back for another episode.

She wore a yellow dress with white spots and a yellow hat with a magenta ribbon tied in a bow at the front of her hat in Poppies and Puddles.

Peppa Pig: The Fractured But Whole

Candy appears exclusively in the Five Nights At Peppa's DLC. Her appearance is actually ironic, as there is a FNAF fan-game called Five Nights At Candy’s. 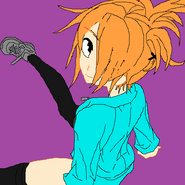 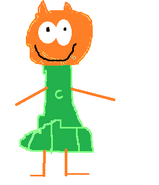 Candy Cat everything started in 1980

Candy Cat in the opening of Peppa's New Tales 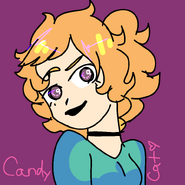 A humanized version of Candy with cat ears and tail in Peppa Pig: Here We Are in the Future!

A humanized version of Candy with her Fall Formal outfit, cat ears, and tail in Peppa Pig: Here We Are in the Future!

Candy Cat, as seen in The Truth about Candy Cat

"so, what's this machine?" (for an upcoming episode I guess)

Community content is available under CC-BY-SA unless otherwise noted.
Advertisement