too much coffee and stress

A crime against humanity

Baby Alexander
Alexander Pig is the son of Aunty Pig and Uncle Pig and the cousin of Peppa Pig. He is still learning how to speak. He also cries a little less, but is learning not to, and is on the road to becoming a stronger baby piggy. He doesn't know how to speak, but he says "goo goo" and "puddles", being his first word. One day, he spoke the words in Aunty Pig's and Uncle Pig's sleep, "I'll eat you all one day." He also blew up a expensive house.

He is light, pink pig baby with dark, pink lips and slighty darker, pink cheeks. He wears a yellow outfit. In MatthewSmarter's fanon, he wears a dark yellow shirt with blue pants and wears black shoes.

Alex can talk and is an evil scientist.

In Peppa's adventures, Alexander is a minor character. He debuts in Season 2.

He appears in the Peppa's Adventures: Next Generation episode "The Fullest House," where, over the last 20+ years, he had been Pedro Pony's roadie in Mexico before getting fired. He then became a drug lord in order to cope. He has also changed his name to Alejandro Pig.

On May 30, 2017, Alexander celebrated his 13th birthday and is in Year/Grade 8 in high school. He wanted to be a fireman when he was older until 2017, when he now wants to be a babysitter.

In Peppa Pig The Future, Baby alexander is a teen.

Do not laugh at the Pippa Pig image. 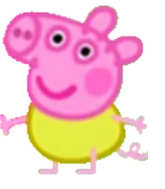 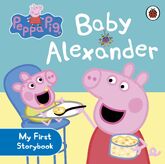 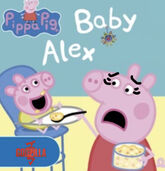 *in demonic voice* "I WILL KILL YOU AND EVERYONE YOU LOVE"

Community content is available under CC-BY-SA unless otherwise noted.
Advertisement